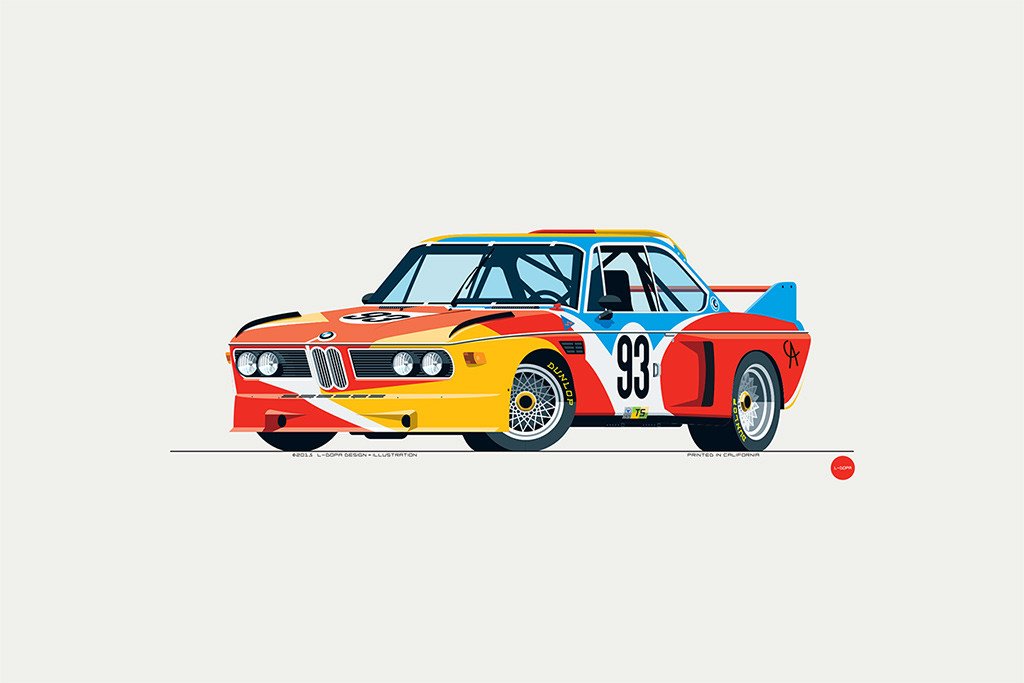 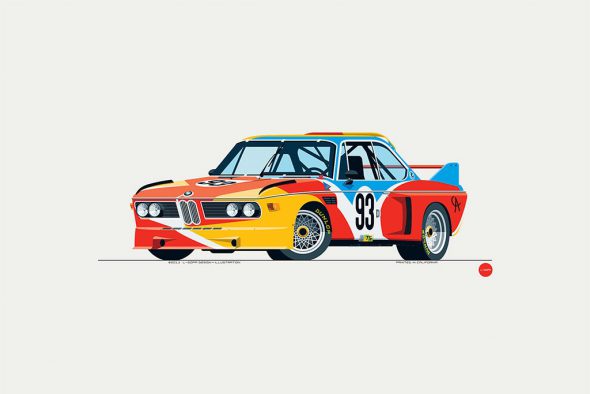 This illustration, for the shopping side of my site features the 1975 BMW 3.0 CSL art car painted by Alexander Calder and entered in that year’s Le Mans 24-hour race.

Here’s more on the story of the car.

The car’s shape was solidified in 1968 with introduction of the 2800 CS (a body style known internally as the E9). Despite its elegant design, this 4-seat grand tourer, didn’t exactly fly off showroom floors. It cost more than a contemporary Porsche 911 or an E-type Jaguar and, as such, had trouble enticing buyers.

In 1971, BMW raised the coupe’s engine displacement from 2.8 to 3 liters. To raise the CS’s value proposition, they took it racing at Le Mans and to the European Touring Car Championships. In order to do so, they had to homologate the racing version for the road. The result was the new, lighter 3.0 CSL.

1973 brought a final homologated version, sporting a series of wings and spoilers, developed by BMW, and tuner Alpina, to improve the car’s handling at racing speeds. This turned the CSL into the world-beating “Batmobile” that dominated European Touring Car racing until 1979.

The CSL’s racing dominance helped raise BMW’s stature but the 1973 oil crisis hampered sales. In total, no more than 1,265 3.0 CSL models were produced.

The 3.0 CSL shown here was created in 1975 when French racing driver Hervé Poulain invited his friend Alexander Calder to paint the car he would campaign that year at Le Mans. The result was the first BMW art car. BMW liked the result so much that commissions by Frank Stella, Roy Liechtenstein, Andy Warhol, Robert Rauschenberg, and many others, followed.

This 3.0 CSL represents the car in what, I think, was its most beautiful guise: an elegant coupe, in muscular racing trim, with a livery by one of the 20th century’s most talented artists.